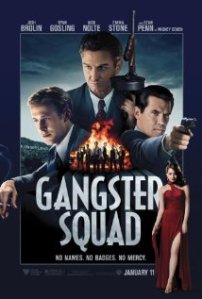 When I first saw the trailer for Gangster Squad back in the fall of 2012, it seemed like it had all the makings of a great film: an up-and-coming director (Ruben Fleischer), set in the ever-fascinating neo-noir crime genre, and it has loads of great actors like Josh Brolin, Giovanni Ribisi, Sean Penn, Ryan Gosling, Emma Stone, Nick Nolte – the list of a great supporting cast goes on and on. But then something happened that made me think twice about the quality of this movie – the release date was pushed back to the dreaded early-in-the-year January release date instead of late fall. When that happens, I always know two things for those movies:

This all spelled bad news for the movie and my own expectations. Despite these setbacks, I buried that inner voice that told me this movie may be a let down, and I decided to see it in theaters regardless, thinking maybe this movie would be different and beat that typical January slump. Ahhhh…ignorance is bliss!

Gangster Squad isn’t a bad movie – in fact, if you go into it with zero expectations, and you’re willing to let yourself go and hang on for the quirky, tongue-in-cheek ride, it can be enjoyable. However, if you watch it with a serious mindset and preconceived notions like I did – you’ll hate it. It just didn’t gel for me, and I couldn’t quite put a finger on why it didn’t work: bad pacing? poor script? poor direction? I honestly don’t know. I suppose with a name like Gangster Squad, you can’t expect something of substance like The Untouchables, Goodfellas, Road to Perdition etc. But Josh Brolin, Sean Penn, Ryan Gosling and the likes surely wouldn’t pick a film that is so poor and brain-dead if it were to be taken seriously would they? I wanted to like this movie so badly, but it just didn’t live up to my expectations.

I still have a hard time distinguishing whether this is a legitimate film that was just poorly executed that contained more style than substance or a tongue-in-cheek film brilliantly executed… you’ll have to decide for yourself, because either way, it’s at least worth one viewing.